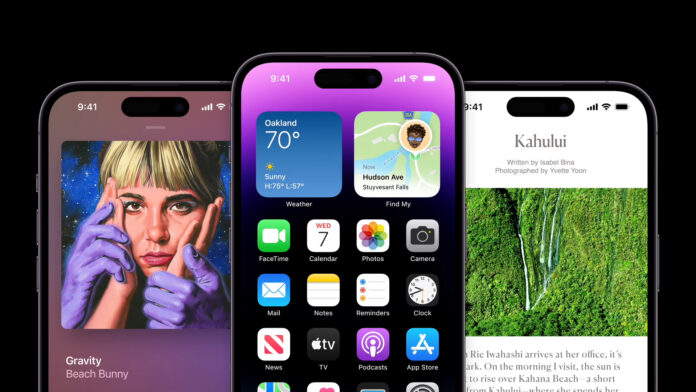 The iPhone 14 Pro is the next step up from the regular iPhone. It features a Super Retina XDR display, Dynamic Island, and Always-On Display. While it isn’t going to offer the same silicon prowess as the iPhone 15, it is still capable of handling heavy tasks.

The iPhone 14 Pro will come with an Always-On Display, an exciting new feature for mobile users. While many competitors have already added the feature, Apple is the first to offer a full-color AOD. In addition, Apple is offering deeper customization options for its AOD than its competitors.

The iPhone 14 Pro will include an always-on display that is heavily inspired by the Lock Screen of iOS 16. The display will display the time, widgets, and Live Activities. Other visual elements, such as flashlight shortcuts, will not be displayed on the lock screen. The iPhone’s Always-On Display is also compatible with iOS 16’s new Lock Screen.

The iPhone 14 Pro will also have a new display that can adjust the refresh rate. A new screen technology called LTPS is used for the AOD. The new display technology allows for a lower refresh rate to save power. This means that the Always-On Display will not drain the battery as much.

The new feature allows the iPhone to save battery life. The Always-On display will only be active when the iPhone is facing down or in a pocket. This means that you can easily turn the screen off if you’re not using it. The screen will also automatically turn off if the phone is placed upside down. As a result, the battery life of the iPhone 14 Pro will be longer.

Dynamic Island is a multitasking app that combines live activity and dynamic content. The new feature allows users to control music and other information without switching from the app they are currently using. The app supports iOS 16 and will be included in the upcoming iPhone 14 Pro and iPhone 14 Max.

Dynamic Island combines notifications and a contextual phone call menu into one area. It blends in with the black cutout on the iPhone’s screen. The company said it was able to do away with the notch because of the squished TrueDepth camera array.

Dynamic Island offers a new way to share real-time alerts, notifications, and activities on the iPhone. This new feature is different from Notifications, which focus on the single app that you are using. Dynamic Island is built to support ongoing background activities, so you can view information about your phone’s location or other relevant items. It also allows you to pause and stop timers directly in the widget.

Dynamic Island also works with Picture-in-Picture videos. While it does not let you drag the PiP window over the cutout, it does move it down automatically. It also lets you view more than one app at a time. It shows the most recently used app, and offers alternative actions and animations.

The Dual camera system on the iPhone 14 Pro offers a new feature called “Autofocus.” Unlike other smartphones, the Autofocus feature can detect when a subject is moving and maintain focus. It also provides higher-quality photos. Besides these improvements, the iPhone 14 also offers enhanced video recording, including a new “Action” mode that smooths out the video.

The camera on the iPhone 14 Pro is a decent upgrade over the iPhone 13’s camera. It also has new features like TrueTone flash and Dolby Vision HDR. The camera is also more stable, thanks to an additional gimbal-like stabilization. In addition, two new safety features have been added to the phone: Crash Detection and Emergency SOS via satellite. Both of these features are rare for smartphones.

The cameras on the iPhone 14 Pro offer better low-light performance. It also supports 4K videos. In addition, the camera can switch focus when another person enters the frame. The iPhone 14 Pro cameras have upgraded image stabilization that should make photos and videos a little bit sharper. The camera on the iPhone 14 Plus has a new sensor with four times the pixel count of the iPhone 13 Pro. The new sensor is also capable of shooting in 4K resolution at 30 frames per second.

Another new feature on the iPhone 14 family is Crash Detection. This feature automatically contacts emergency services if the device detects a crash. This feature is also coming to the Apple Watch Series 8 and Ultra.

The iPhone 14 Pro Max are equipped with a 6.7-inch OLED Super Retina XDR display. They also feature the new TrueDepth camera notch. These new phones are designed to provide users with a more immersive viewing experience. The displays have a 2,000:1 contrast ratio and support HDR. The brightness of these screens is impressive too, able to reach over 2,000 nits outdoors. They are also equipped with ProMotion, which adds a 120-Hz refresh rate.

Super Retina XDR displays are made with OLED panels, which offer greater contrast ratios and brightness than LCD panels. Apple has marketed these new displays as “super” for the iPhone 11 Pro and other products that feature the new technology. While LCD displays are still popular with iPhone users, Apple has improved their displays with “Super Retina XDR” displays.

The iPhone 14 Pro also features an additional GPU core and more RAM than the iPhone 12. The phone also features a 48MP main camera, Dynamic Island, and Always-On Display. Although these features are currently exclusive to the Pro, they will be coming to non-Pro iPhones as well.

Crash detection is a safety feature that can help you avoid serious accidents, especially those involving four-wheel passenger vehicles. Apple’s new feature uses motion sensors developed at crash testing labs to better identify potential crashes. The system analyzes data collected from simulated real-world crashes. While the new technology is still in its initial stages, it can be life-saving in some cases.

Crash Detection is a safety feature that can detect severe car crashes and automatically dial emergency services. The technology is based on hardware, and uses a high-g-force accelerometer capable of detecting accelerations of 256 Gs or more. It also uses a barometer to detect changes in cabin pressure, and a microphone to identify loud noises typified by car crashes.

Crash detection works on most types of vehicles. The iPhone 14 Pro and 14 Plus feature this technology. It has similar capabilities to Google’s Car Crash Detection. If a crash occurs, the device will send the location information and data to emergency services. This feature has saved many lives, and it’s a great safety feature for drivers.

Crash detection on the iPhone 14 Pro uses improved sensor technology that makes it a better safety feature than ever before. The improved gyroscope and accelerometer can register more movement than their predecessors. The iPhone also has a microphone to record the sound of a crash, and it uses GPS to find its location. The algorithm is based on more than a million hours of data to determine the exact location and type of crash.

Whether you’re at home, in a remote area, or in an emergency, the iPhone 14 pro with Emergency SOS via satellite can help you stay connected. This feature works with satellite telecommunications company Globalstar to connect you to emergency personnel in an emergency. The app even lets you send text messages to emergency contacts.

The Emergency SOS via satellite app works by using the antennas on your iPhone 14 to connect to the frequencies of communication satellites. These satellites cannot be seen by the human eye, so your phone must be pointed at a clear sky to make a connection. Once connected, the Emergency SOS via satellite service will ask you questions to assess the situation and relay the information to emergency services. The service was developed in consultation with emergency experts to offer the best response options in the most common scenarios.

The service will be available for free in the U.S. and Canada in November. However, there will be costs associated with the service after that. Starlink and Lynk are also expected to have their services up and running by that time. Once this happens, iPhone users will have the ability to call emergency services from anywhere in the world.

The Emergency SOS via satellite feature of the iPhone 14 pro will connect you directly to emergency services. It can also send text messages, but this is only useful if you have no coverage or no phone signal. Apple suggests that you call emergency services before using this feature. The app will then ask you a few vital questions and then send the information to the appropriate emergency services. You can also select whether or not you want to notify your contacts.